The latest life expectancy figures are out –What do they mean for pensions?

This week the CMI (Continuous Mortality Investigation of the Institute and Faculty of Actuaries) released the latest version of its Mortality Projections Model, also known as CMI_2019.

What are the key findings, and what does it all mean for trustees and employers with pension schemes?

Improvements in mortality over 2019 – at just under 4% – are some of the highest seen over the last 10 years.

Improvements for males aged 97 to 100 are slightly lower than last year.

How does this compare with previous years?

The tables below compare the projected life expectancies from CMI_2019 with previous years:

Technical bit: Life expectancies are calculated using the S3PA mortality base tables, assuming a long-term rate of improvement of 1.5% p.a

Mortality over 2019 has been lower than in any previous year considered (there have been fewer deaths than the long-term average would suggest). This is shown in the solid black line in the chart below.

The same pattern can be found when looking at rates of mortality improvement, which have been well above the average over the last 10 years, again shown by the solid black line in the second chart below. 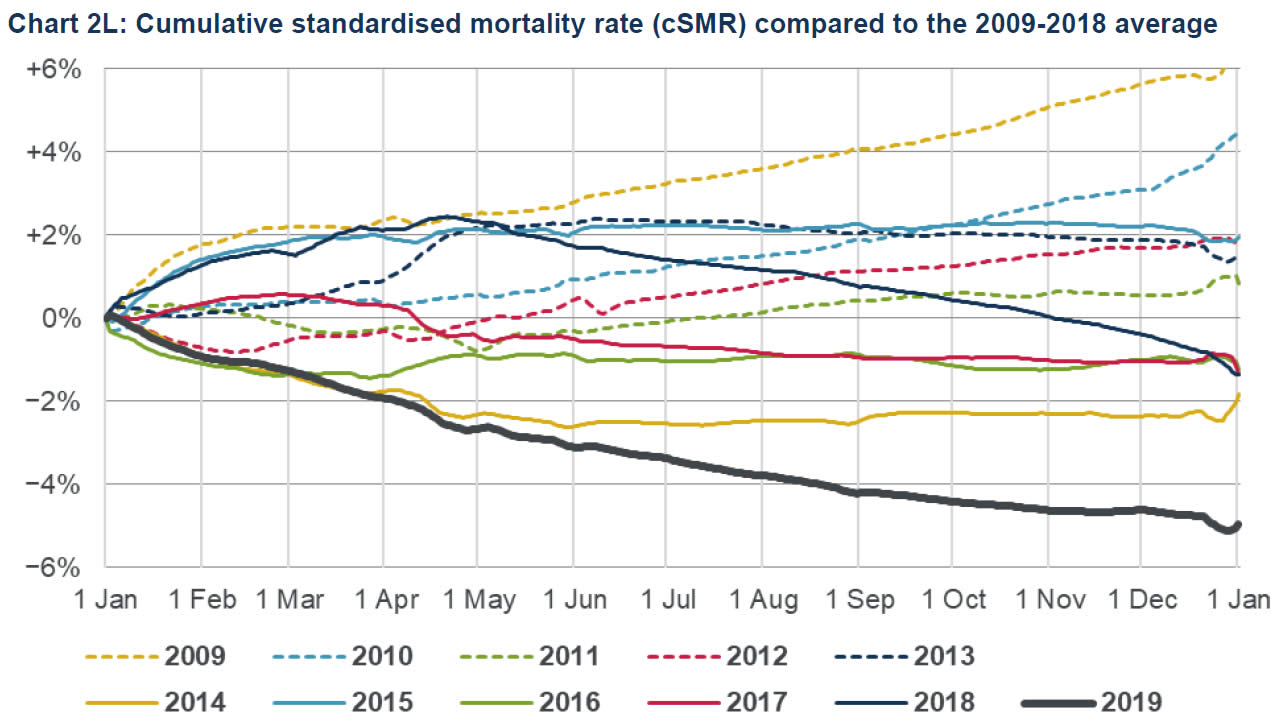 While averages are useful, we should bear in mind that mortality improvements can vary significantly between different populations.

The CMI notes that in England and Wales, mortality improvements in less deprived areas have been about 1% a year higher than those in more deprived areas.

These findings are echoed in the recent report Health equity in England: The Marmot Review 10 years on, which demonstrated a clear link between life expectancy and area deprivation.

What does all this mean for pension trustees and sponsors?

Trustees and employers will be keen to gauge the impact of the latest projections. We estimate that for valuations in 2020, life expectancies could be around 1% to 2% lower compared to typical assumptions that may have been adopted three years ago.

Trustees and sponsors with scheme valuations in 2020 may see a small reduction in liabilities as a result of adopting the latest set of mortality projection tables.

The data and charts used in this article have been prepared by and/or on behalf of Continuous Mortality Investigation Limited (CMI). The CMI does not accept any responsibility and/or liability whatsoever for the content. The CMI does not (i) warrant its accuracy; or (ii) guarantee any outcome or result from the application of any of CMI’s work. You assume sole responsibility for your use and for any and all conclusions drawn from its use. CMI hereby excludes all warranties, representations, conditions and all other terms of any kind whatsoever implied by statute or common law, to the fullest extent permitted by applicable law. © Continuous Mortality Investigation Limited.

Any questions or comments about this article?

Get in touch with the author, Craig Moran.

Our briefings are rightly famous. Enjoy their unique combination of acerbic wit and pension insights.

Concerned about the risk of an Employer contribution increase as a result of high liabilities, Trustees of the Kennel Club Pension Fund turned to First Actuarial.

“They’re extremely professional and helpful. Their input always seems sound, logical and well presented. First Actuarial handled the transition well, they provide us with helpful guidance, and have delivered what they promised when they pitched for the work.”

The RSPB was determined to minimise the impact of its new defined contribution scheme on employees, and appointed First Actuarial to support the transition and select a provider with strong ethical values.

“I would definitely recommend working with First Actuarial. Their consultants went over and above the call of duty to make sure the project progressed smoothly.”

Taking responsibility for care services previously provided by a local authority, Bolton Cares turned to First Actuarial for help in setting up a competitive and affordable DC pension scheme for its staff.

“They’ve been really helpful and professional throughout the project, and we’ll use them again if we need specialist advice.”

Please provide the following information which will help us to deal with your enquiry more efficiently:

Book Course - The latest life expectancy figures are out –What do they mean for pensions?