The Occupational Pension Schemes (Investment and Disclosure) (Amendment) Regulations 2019, which establishes new levels of transparency and stewardship in pension scheme investment, is now upon us.

Trustees should have already updated their Statement of Investment Principles (SIP) with details of their voting arrangements with asset managers, and will need to include an Implementation Statement in their next scheme annual report and accounts.

One of the new requirements is that trustees must monitor the voting practices of their investment managers, with full consideration of significant votes.

Rather unhelpfully, the concept of a significant vote is not defined in the legislation, and The Pensions Regulator has not issued guidance. We are aware that some consultants – possibly because it’s the easiest solution to yet another disclosure requirement – intend to leave it to investment managers to determine which votes were significant. This is akin to asking managers to mark their own homework – a fundamentally flawed approach.

It is also an opportunity missed, in our view. First Actuarial supports the underlying principles of these new requirements. Holding up the voting record of investment managers to closer scrutiny is right and proper, and a robust process, if well designed, need not be onerous for trustees.

Any feedback generated by the process should encourage investment managers to take their voting responsibilities seriously. At First Actuarial, trustees and sponsors increasingly ask us to help them make a positive impact on issues such as climate change with their investments. Voting at shareholders meeting is one way that shareholders can make a difference in such areas. To achieve this, it’s crucial that fund managers’ votes align with the aspirations of the scheme. This is why we are so keen to draw out the differences in fund managers voting records and to ask fund managers to justify their actions.

For this reason, we have developed an approach that provides meaningful analysis of investment managers’ votes in a way that is simple for trustees to implement.

We start with the results of more than 20,000 votes held at the AGMs of companies listed in major developed markets during the previous year. This data is provided by PIRC, corporate governance specialists who carry out voting and engagement activities on behalf of organisations and pension schemes.

We group the voting data into eight categories and, within each category, we rank the votes in order of the proportion of shareholders voting in favour of each proposal.

Our view is that significant votes are those that sit in the middle of the rankings. These tend to be closely contested votes, indicating that the action of an individual investment manager may have had a meaningful impact on the outcome.

Our approach means that we can compare the voting records of different managers in a meaningful way and, for additional context, we also provide a comparison with the voting history of local authority pension schemes (as implemented by PIRC).

We recently completed our first voting analysis, based on data for the year ending 31 March 2020. Here are some of our key findings.

In this category, votes are brought by shareholders with proposals typically seeking to require companies to take action on environmental or social matters.

Our analysis of the five most significant votes in this category (and indeed of the longer list of votes) indicates that Manager B is less likely than their peers to support shareholder proposals of this nature.

On the back of our research, we have requested a meeting with Manager B to discuss their practice towards voting on shareholder proposals. Such action is what the legislation envisaged – ensuring investment managers are held to account over their voting practices.

Manager B has recently announced a change in approach, meaning it intends to vote in favour of more shareholder resolutions aimed at tackling climate change. We are monitoring this position to see if this is delivered in practice.

In the chart below, we present our analysis of significant votes for an active manager which, we have previously concluded, has firmly embedded Environmental, Social and Governance (ESG) issues in their stock selection procedures.

At first glance, analysis of their voting record in significant votes is surprising. This is a manager who seems inclined to vote with management on director-brought proposals (the first six categories), while mainly opposing shareholder votes. 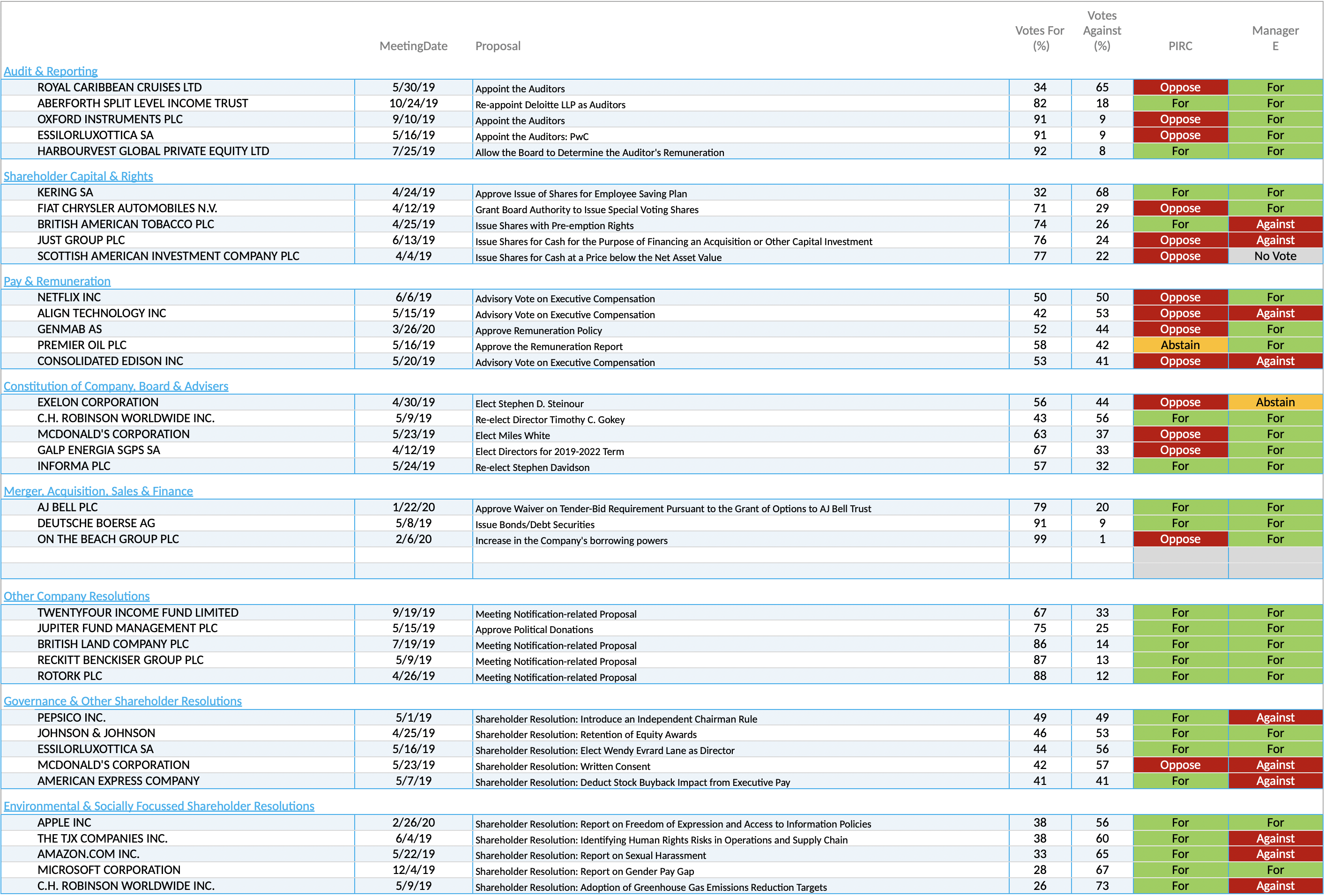 However, this manager has actively selected the companies in which it invests and their favourable assessment of the management of those companies will have been a key factor in its decisions. It is perhaps unsurprising then that Manager E tends to vote in favour of the management boards.

Nevertheless, we have asked them to provide an explanation for some of their voting. For example, the manager’s own voting guidelines states that it will “consider voting against the auditors’ appointment if we have concerns about their independence, level of non-audit fees”. Yet they voted in favour of all five of our most significant votes in this category, including the Royal Caribbean resolution where a significant majority of shareholders voted against.

In the final two categories (votes brought by shareholders), the manager frequently opposes the proposals. The manager responded very quickly to our queries in this regard – generally with answers which we considered to be reasonable. For example:

“We opposed this shareholder proposal as we believed the company were making progress in this area. We have engaged with the company on its approach to climate change and responsible transportation and continue to encourage progress.”

Finally, we have identified an investment manager which only votes on stocks held within actively-managed mandates. If trustees invest in one of their passive funds, the manager does not exercise voting rights at all. For those wanting their fund manager to have a positive impact on the world and society with their voting, this is likely to be unacceptable. If this manager is asked to provide their voting record in significant votes, it is likely that they will provide examples from the votes cast on stocks held in their active mandates. They are unlikely to disclose that they do not vote on passively-held companies.

Votes in this category are brought by the company management, and represent a request for shareholders to sanction the directors’ preferred way of proceeding, for example by agreeing to the appointment of auditors or to accept the accounts.

The importance of a robust audit appointment process is increasingly recognised. Scandals such as Enron, Parmalat and, more recently, Wirecard, could have been avoided under a more rigorous audit regime. A periodic change of auditor can be an important safeguard against such problems being repeated or overlooked.

The voting records of four major investment managers in our five most significant votes in this category are shown below.

Although we only show five votes here, our analysis considers many more votes and certain patterns are repeated. Managers A and C consistently demonstrate a willingness to vote against company proposals in this area, whereas Managers B and D are much more inclined to vote with management.

If either Manager B or D were asked to provide details of how they voted in significant votes, we consider it unlikely that they would readily provide information suggesting they are more willing than many of their peers to wave through auditor appointments.

The new legislation offers an opportunity to look at investment managers in a different way, and we are optimistic that this will lead to more responsible voting over time. However, in order to hold investment managers to scrutiny, it is vital that managers are not allowed to determine which votes are significant.

Our approach makes it easy for trustees to undertake a robust analysis and leaves investment managers with fewer places to hide.

Any questions or comments about this article?

Get in touch with the author, Andrew Overend.

Our briefings are rightly famous. Enjoy their unique combination of acerbic wit and pension insights.

Concerned about the risk of an Employer contribution increase as a result of high liabilities, Trustees of the Kennel Club Pension Fund turned to First Actuarial.

“They’re extremely professional and helpful. Their input always seems sound, logical and well presented. First Actuarial handled the transition well, they provide us with helpful guidance, and have delivered what they promised when they pitched for the work.”

The RSPB was determined to minimise the impact of its new defined contribution scheme on employees, and appointed First Actuarial to support the transition and select a provider with strong ethical values.

“I would definitely recommend working with First Actuarial. Their consultants went over and above the call of duty to make sure the project progressed smoothly.”

Taking responsibility for care services previously provided by a local authority, Bolton Cares turned to First Actuarial for help in setting up a competitive and affordable DC pension scheme for its staff.

“They’ve been really helpful and professional throughout the project, and we’ll use them again if we need specialist advice.”

Please provide the following information which will help us to deal with your enquiry more efficiently: